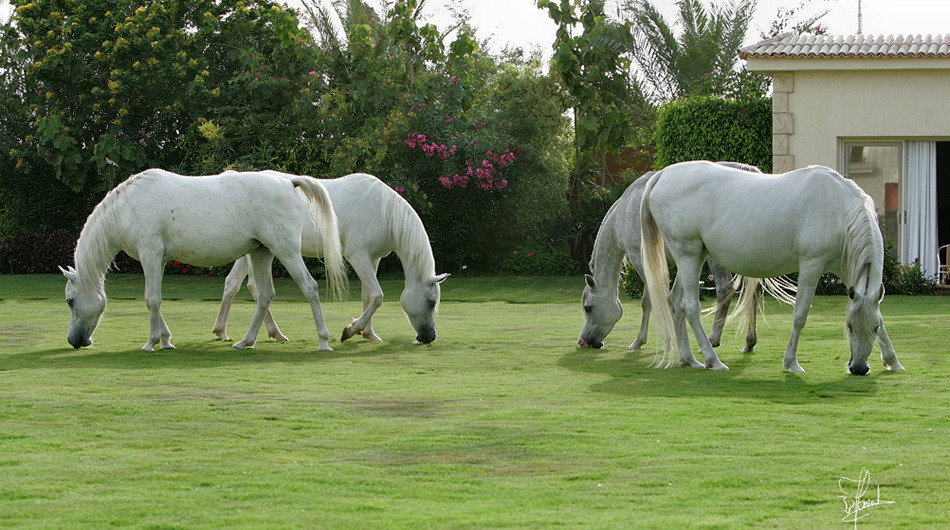 El Farida stud is owned by Tarek and Ahmed Hamdy Soliman, life-long horse lovers. From a young age their father enchanted them with stories about the Arabian horse: the history, the beauty, and bloodlines; especially the straight Egyptian Arabian line which started with Abbas Pacha hundreds of years ago.

Tarek joined a riding school and learned the fine arts of equitation, while his brother Ahmed did research on age old Arabian bloodlines.
Both brothers were amazed by the beautiful Arabian horse, and believed that beauty runs in the blood of pure Egyptian Arabians.

In the year 2000, out of love for the horse and the mission to improve the straight Arabian bloodlines, they opened El Farida stud.
After years of carefully selecting mares and stallions, the first foals were born in 2005. Tarek and Ahmed were very aware that, in order to improve the Arabian bloodlines in Egypt, they needed the best stallions and mares available.
In 2007 Imperial stud (in the USA) announced they were closing their doors. The brothers decided to take this chance, and purchased Imperial Baareg (son of Imperial Baarez).

Barbera Griffith, owner of the Imperial stud, was still looking for a suitable buyer for Imperial Baarez. Baarez, being one of her strongest stallions, was only to move to a stable that could get her appreciation. After Barbera saw how Imperial Baareg enjoyed El Farida stud, she decided to sell Imperial Baarez to Tarek and Ahmed.

With the purchase of Imperial Baarez, the dream of Tarek and Ahmed was finally completed. In a very short period of time, El Farida stud became one of the most important and famous stud farms in Egypt.

El Farida's strong selection of mares and stallions, successful breeding program and profound equine knowledge are resulting in foals with unique bloodlines that will leave a mark on the world of the straight Egyptian Arabian horse for a long time to come.